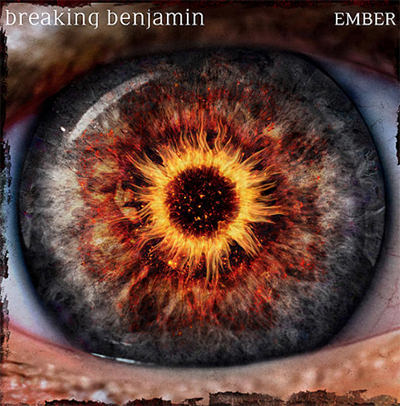 Breaking Benjamin released its sixth studio album Ember on April 13 through Hollywood Records. The follow-up to the band’s 2015 release Dark Before Dawn lives up to fans expectations. It is heavier, alternating between extreme and  infectiously groovy. The music puts heavy emphasis on a harsh textured energy with new dynamics on rhythm section and background vocals.

They do not reinvent the wheel but change the formula a little. As a result, it is enough to keep things interesting. The songs maintain the Breaking Benjamin core sound while still managing to be fresh. The massive hit single, Red Cold River set the tone with Blood. Songs feel energetic and passionate. It is definitely well-elaborated. It also feels more natural than previously. The production is top-notch. The intensity stays true from start to end. There’s much in the approach of guitar riffs. They explore the outer limits of its textures. It is impressive.  Bombastic on Psycho and Torn in Two, the riffing is crispy, propulsive and varied. Save Yourself is fiery. The ballad Dark of You has rich moments of harmony. Special guest singer-dancer Derek Hough adds a nice soft contrast to raw vocals of Benjamin Burnley.

All in all, Breaking Benjamin ’s New Album Ember will be a delight for fans and newcomers. It is a strong effort that shows a renewed sense to craft some of more memorable lyrics and melodies in their catalog. They crafted something enthralling that stays unique and captivating . It is arguably, one of their best offerings. Highly recommended.