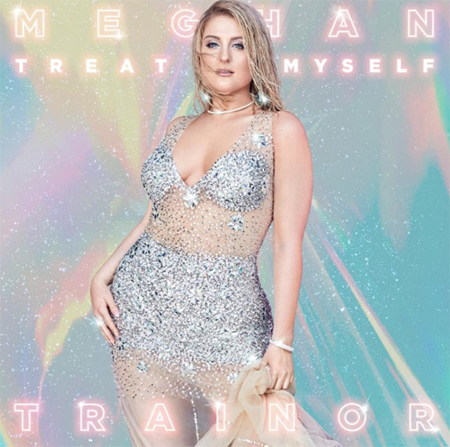 Pre-order goes live today and unlocks instant grat downloads of the songs  LET YOU BE RIGHT, CAN’T DANCE,  and  NO EXCUSES  as well as a brand new track  ALL THE WAYS. Pre-order it HERE!

About TREAT MYSELF, Meghan said, “This album is my best work yet and I’m so proud of what we made. I say “we” because I made this entire album with my family, my friends, and my fiancé. It’s everything I stand for and I’m excited to put an upbeat happy album out for the world.”

A pre-order is live now for the Target Exclusive version of the album, including exclusive remixes of “ALL THE WAYS.” Fans can purchase it HERE. This marks the second partnership between Meghan and Target. In 2016, they joined forces to release a Target Exclusive of her second album Thank You.
Right now, Meghan is everywhere! Tonight, you can catch her on a new episode of The Four on Fox 8/7c. Saturday, her seismic Radio Disney Music Awards performance airs on the Disney Channel. Earlier this month, she hit the stage at The Late Show With Stephen Colbert on CBS to perform “LET YOU BE RIGHT,” and opened the Today Show’s summer concert series. Monday June 25, she co-hosts Today alongside Hoda Kotb in the morning and guests on The Tonight Show Starring Jimmy Fallon that evening.
It's only fair to share...